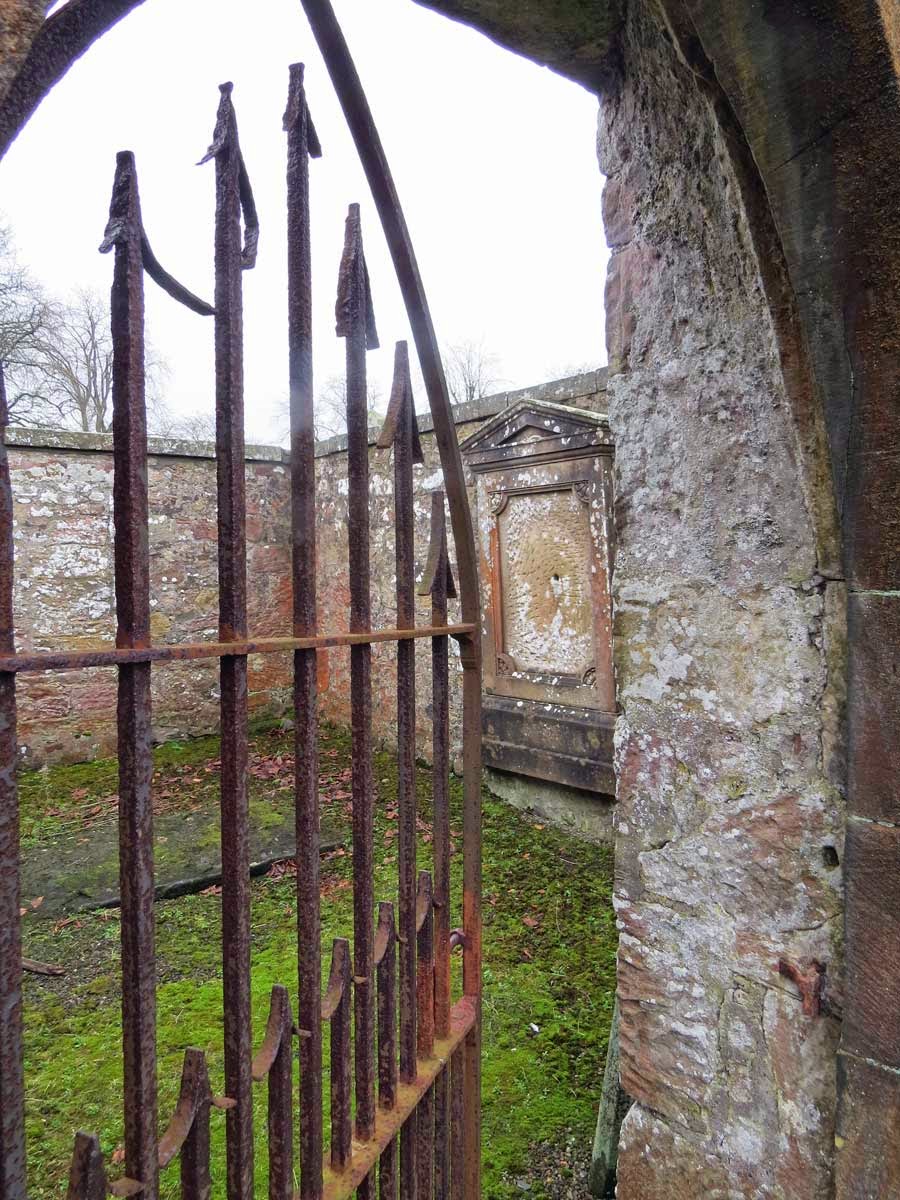 It's Thursday and that means the ThursdayDereliction challenge for the Blipfoto site. As we needed to to into West Linton I decided to pay a visit to my old haunts in the graveyard. It's been a very long time (more than a year) since I last updated this blog although I have been in the graveyard since then. I usually pop in whenever I have a spare minute when I'm in the village. Most of the gravestones have now been documented but I must make sure I haven't missed any, one of these days.

Sadly dereliction is easy to find as the gravestones have deteriorated a lot since my first visit many years ago. Above the entrance to the Douglas mausoleum. 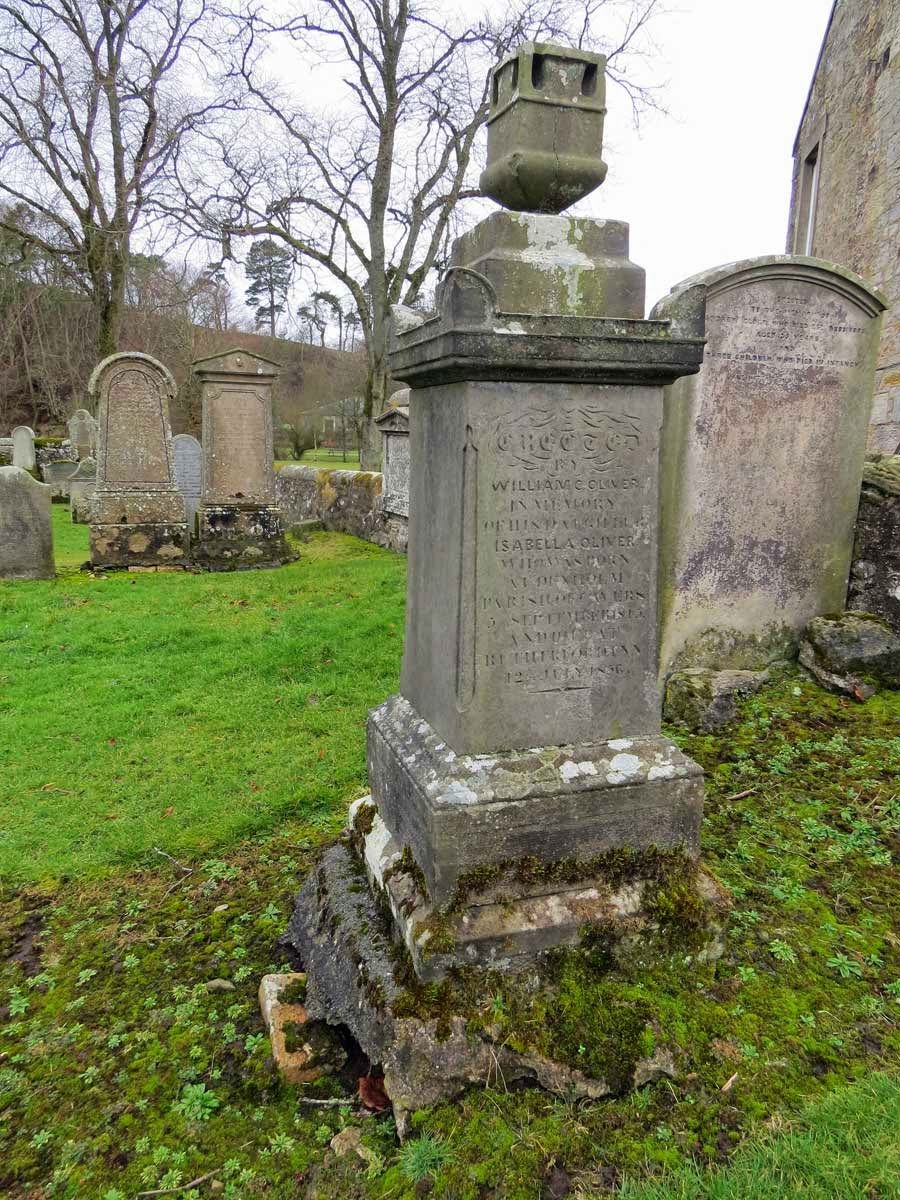 And I feel it won't be too much longer before this lovely monument will topple over. It was erected by William C. Oliver in memory of his daughter Isabella Oliver who died 12 July 1856 aged 40. You can read about it on the West Linton graveyard blog here.  This will become my blip today after I have converted it digitally into a black and white image. 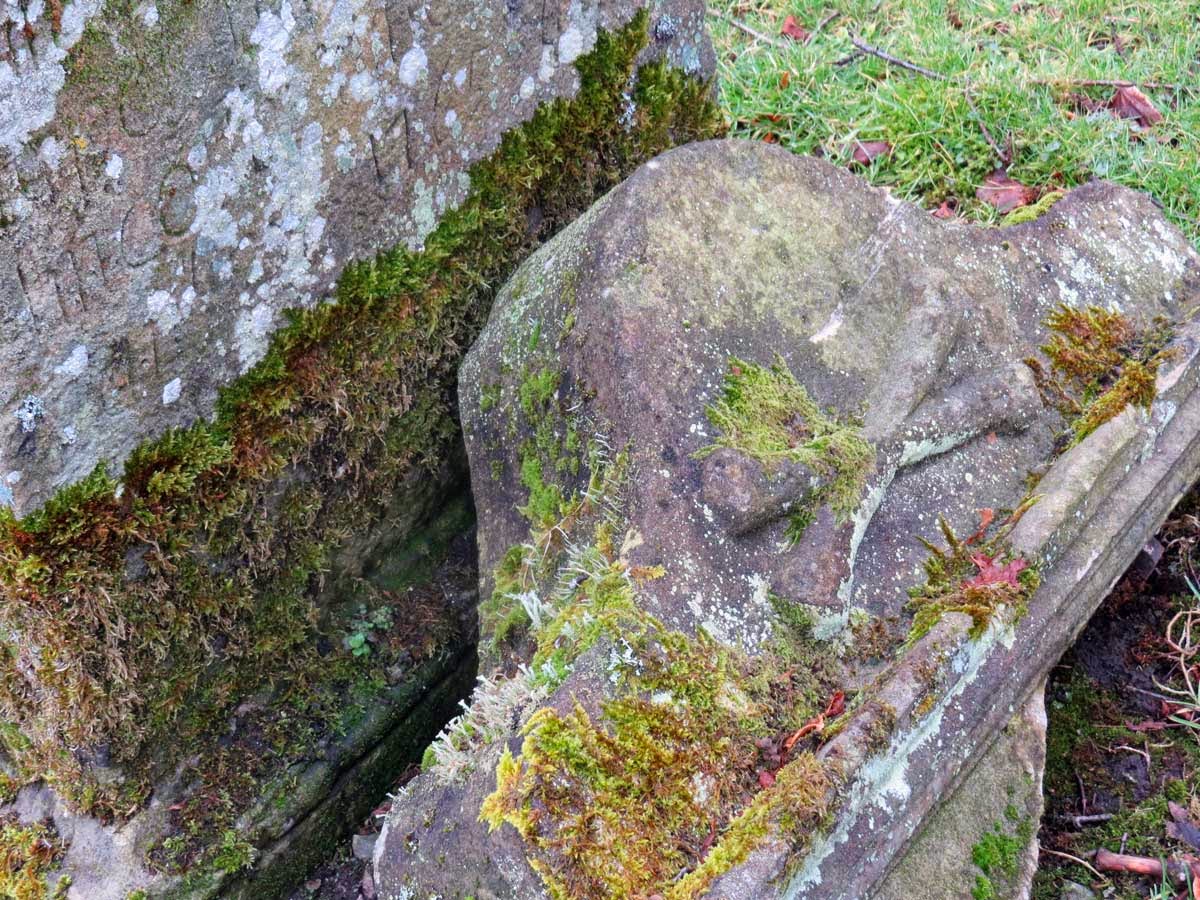 This gravestone has already bitten the dust in more ways than one. 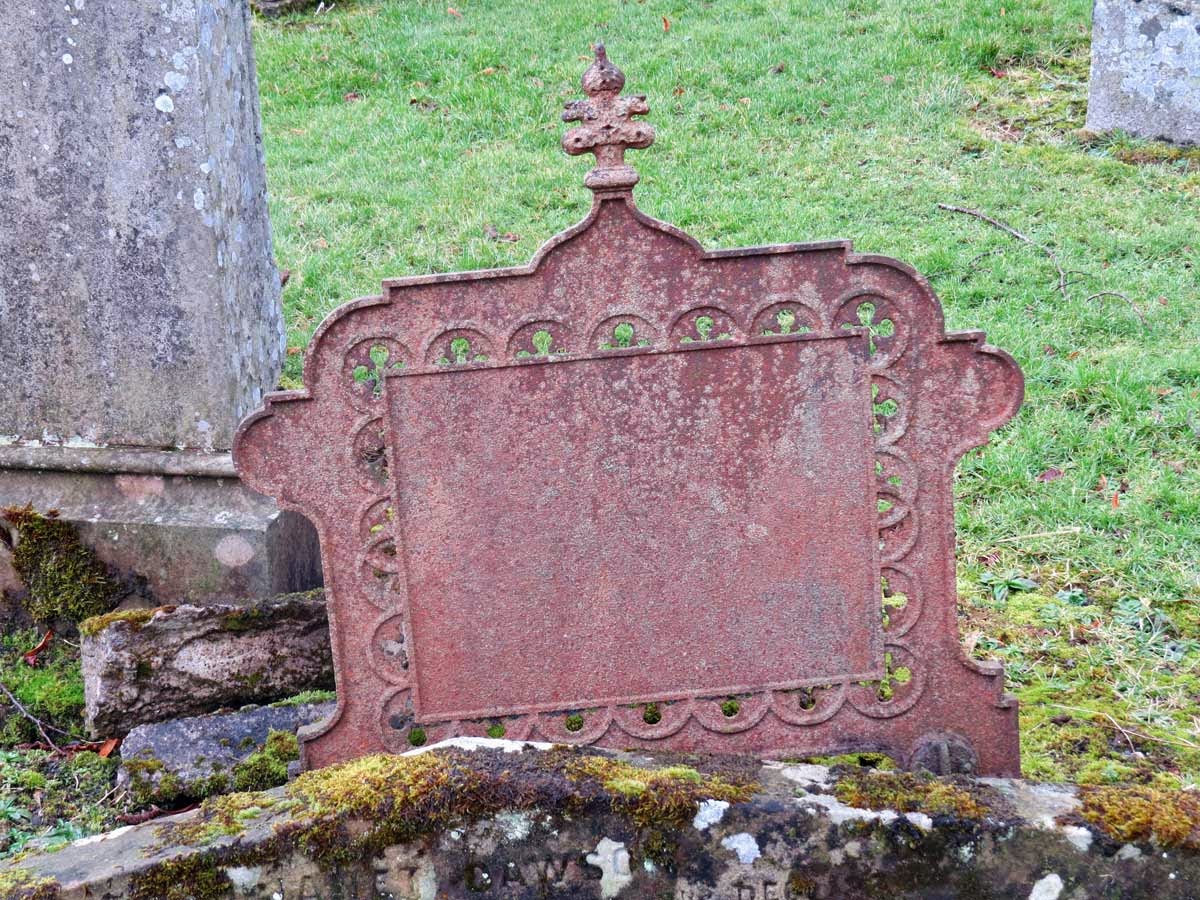 And sadly we will probably never know who lies buried here. Although the metal has survived, the inscription has not. 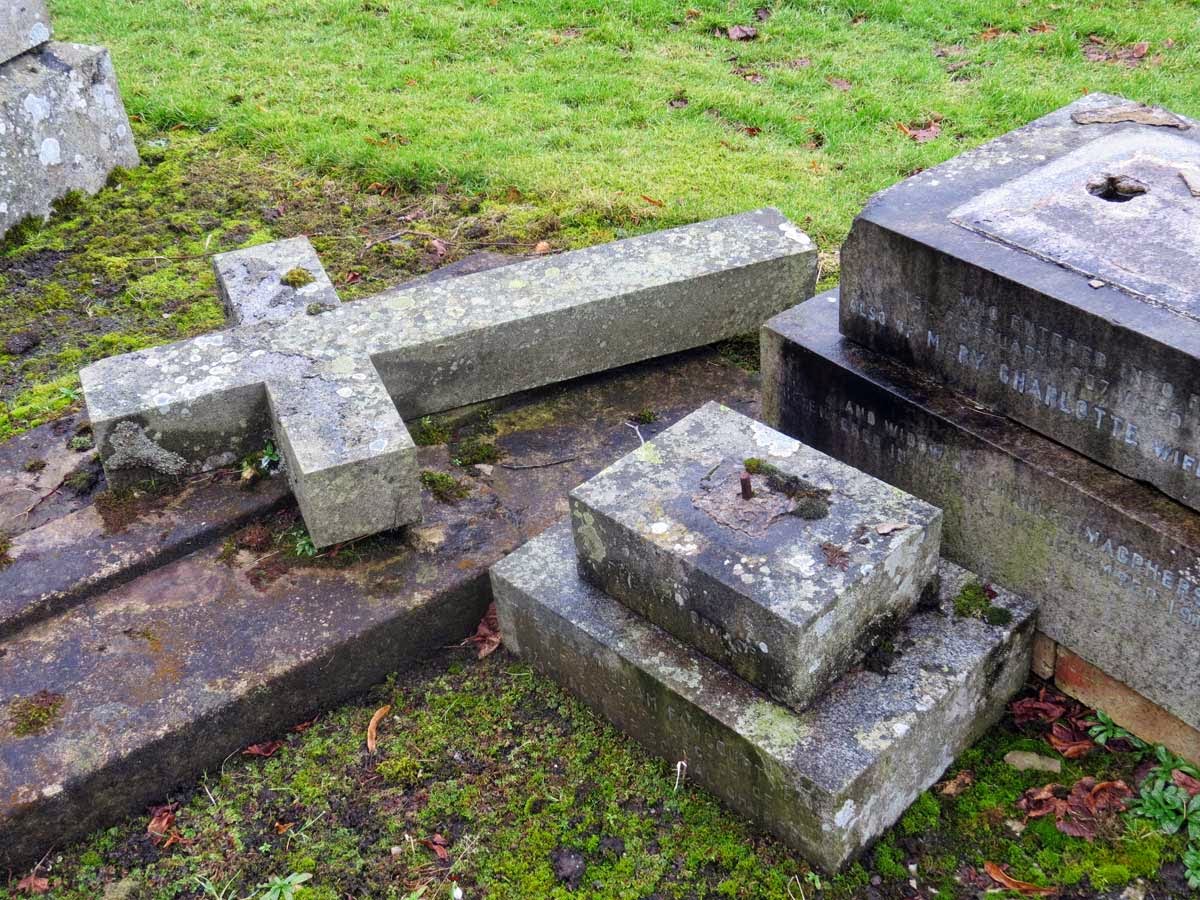 This cross too has fallen down although all the inscriptions on the stones still make it clear whose grave monument this was.
Posted by Frieda Oxenham at 11:21 No comments:

The Graveyard in Autumn 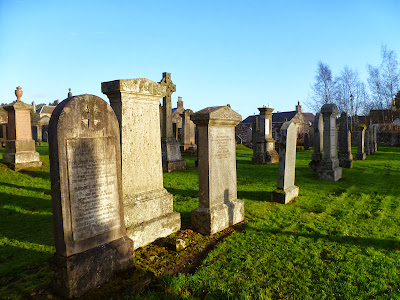 Posted by Frieda Oxenham at 17:07 No comments: 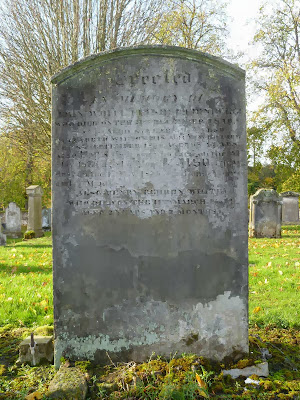 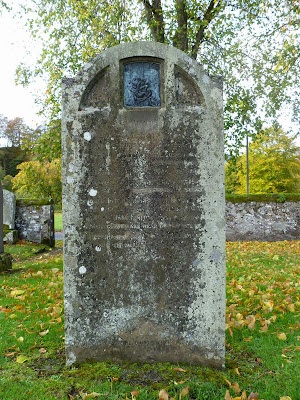 The above gravestone is most impressive and probably cost a fair penny but sadly it hasn't stood the test of time very well and the text is now virtually unreadable. I'm noting here the text as found in Sheila A. Scott's book Peeblesshire Monumental Inscriptions pre 1855: 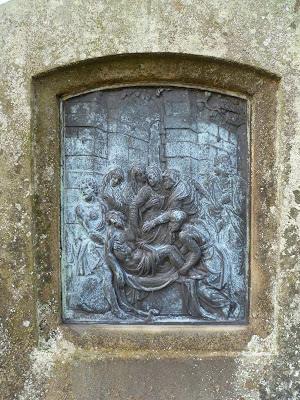 It's hard to date the gravestone. It's certainly not contemporary with the oldest burials as far as I can tell. It was probably erected by more recent generations and they included their forebears on the stone.
Posted by Frieda Oxenham at 17:17 No comments:

Email ThisBlogThis!Share to TwitterShare to FacebookShare to Pinterest
Labels: emigration 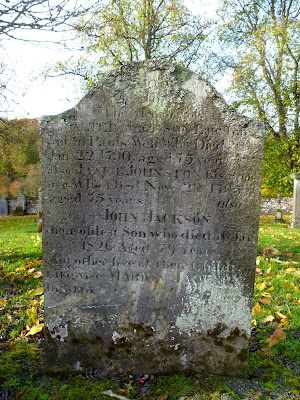 The above is a very old stone which can still be partially read although toward the bottom the text has disappeared into the ground. Here is what remains: 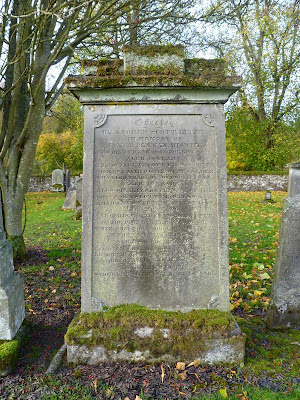 I'm ticking off the gravestones I haven't recorded yet in Sheila A. Scott's book Peeblesshire Monumental Inscriptions pre 1855 and they are becoming increasingly rare to find. Not just because I have done most of them by now but mostly because the stones are so hard to find. However I have no idea why I haven't done this one before as it's quite large and impressive. Here is the text:

Cease ye from man whose breath is in
his nostrils by wherein is he to be accounted of.. Isaiah II 22

Andrew Scott certainly lived with a lot of tragedies in his life! Wife and Daughter dying within a day of each other and losing his son and daughter-in-law within a fortnight of each other in a far flung place, probably as a result of some epidemic or other. 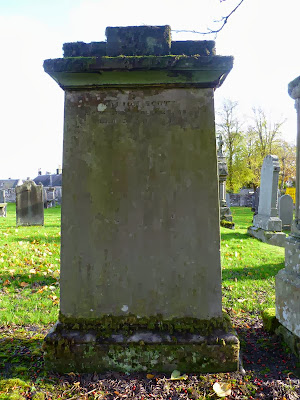 On the back of the same gravestone there is another inscription:

Marion Scott
born 31st March 1830
died 31st March 1835
Was this yet another tragedy? It seems more than likely that this was Andrew Scott's young daughter, died at the age of exactly 5 years. How does a person live through all that? 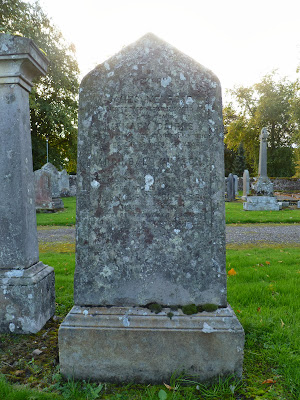 Frieda Oxenham
I am an award winning artist mainly working in textiles and mixed media, whose work has been exhibited both nationally and internationally,and has won many prizes including winning the Scottish Quilt Championship in 1998, the European Quilt Championship in 2006 and the British Quilt and Stitch Village in 2015. My work has also won prizes for hand workmanship, computer design, art quilting and embellishment. I entered the world of mixed media around 2004 and my Artist Trading Card (ATC) Enduring, Unending won Best of Show in the House of Cards exhibition, Columbus, Ohio, 2005. I love art journalling and at the moment I'm an monthly Guest Designer for Stencilgirl Products. My art has been published in a wide variety of magazines and books both here in the U.K. and abroad.I love photography and have uploaded a daily picture to the Blipfoto site for more than 9 years. In 2012 I completed my self set task of making one Journal Quilt every week in the 52 Journals Project and they were exhibited in a very successful show in Peebles in 2014. I'm a full-time studio artist.